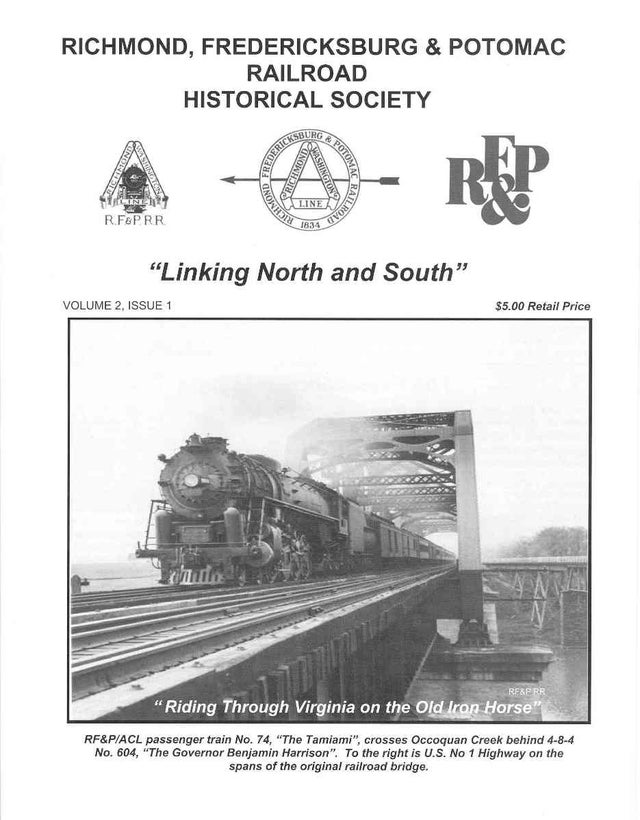 Volume 2, Issue 1, featured the first installment of “Riding Through Virginia on the Old Iron Horse” by Robert Puryear. Mr. Puryear wrote about his trip from Washington D.C. to Richmond aboard the Governor Patrick Henry, engine number 601, while serving as a fireman. The conclusion of his story will be in our second issue.

Two other items are “Once Upon a Timetable” that features an extract from the December 15, 1955, employee timetable and an article comparing train dispatching “then” (1932) and “now” (the early 1970’s). We hope that this second topic can eventually expand into a “From the Dispatcher’s Desk” column that would provide the membership with an inside look at how real-time train dispatching was performed.

Two of our members, Wayne Kendrick and Rob Furney, Jr., share their memories of the RF&P RR with us and make us wish we had been with them trackside.

Our Modeling Editor and Correspondent, Craig Harrison, looks back at 2005 and highlights the many products that were either available or in the works. His article is followed by a product review of the MTH S-2 three-rail “O” Gauge switcher.

In addition to the above, the Executive Committee, on behalf of the entire membership, honors one of our own with a Special Member Recognition. This action is being taken to recognize William E. Griffin, Jr., a member of our Society who has generously shared both his time and knowledge with us and has asked for nothing in return.