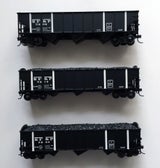 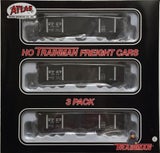 In mid-1979 the RF&P began to procure second-hand 70 ton capacity, three-bay hoppers. The majority of the cars were former Chesapeake and Ohio H-23 class with 2,608 cubic foot capacity. Most of these had distinctive extended end plates or “heap shields” that protected a heaped load from sliding off the end of a car. These heap shields were semicircular in shape, but notched where the end grab irons reached the top of the car. All of the cars were painted in the RF&P's standard black color used for open cars, with white stenciling. The four, white, vertical stripes, typical for the RF&P, were used for visibility and to signify that the cars were not for interchange. The RF&P’s main use for them was to move sand and gravel between Potomac Yard and the Dahlgren Branch, where much of the RF&P’s aggregate business was located, and crushed granite from the Doswell area to Solite facilities elsewhere on the railroad.